Breaking the Barriers to Innovation

The New Aerospace Pioneers of the 21st Century

In the mid-1930’s engineers faced many challenges in designing the world’s first supersonic aircraft.  The term “sound barrier” was coined as they sought to reach a speed faster than the speed of sound.  “Sound barrier” also represented the hurdle to prove a plane could be built to safely carry a pilot and crew flying supersonic.  In 1947, with the sharp crack of a sonic boom over the Mohave Dessert, Captain Chuck Yeager safely overcame those hurdles and broke the sound barrier.

At each milestone in aviation history, engineers and daring aviators and astronauts have found ways to break the bounds of earth’s gravity. The Montegolfier Brothers developed the first balloons in 1783. The Wright Brothers recorded the first powered flight in 1903. Yuri Gagarian achieved first orbit in 1961. And, Neil Armstrong took the first step on the moon in 1969. These first pioneers of aerospace boldly led the world into new frontiers of flight.

Today, we are part of a new century of powered flight and space exploration.  With the same daring and the advantages of new technologies, aerospace inventors push the boundaries of flight. Regional aerospace companies like Embraer and Saab Aerospace are disrupting the aerospace market with their own programs. Start-ups like Joby Aviation, Boom, Blue Origin and Space X push the envelope of what is possible. Established players also reinvent and reinvigorate their businesses by accelerating innovation and driving down costs.

The Past and Present Pioneers of Aerospace

Innovation in Aerospace is fueled by the achievements of those who dare to break barriers previously thought impossible.  Brave pioneers like the Montegolfier or Wright brothers proved flight was possible, while brave men like Chuck Yeager, Yuri Gagarian and Neil Armstrong continued to push the boundaries of what we thought possible.

This same pioneering spirit continues today as companies like Joby Aviation, Solar Impulse, Thales Alenia Space Italia and others continue this pioneering spirit as we enter the second century of powered flight.

Download this infographic to learn their stories and understand how Dassault Systèmes is helping companies blast off into a new era of aerospace.

Just before you break through the sound barrier, the cockpit shakes the most.

An Industry Poised for Growth

With increased competition and demand for new technology to make the world safer and easier to travel in a sustainable way, the Aerospace and Defense (A&D) industry continually reshapes itself, building on its long history and culture of innovation.

Security concerns across the globe have fueled increased levels of defense spending, especially in the United States, Europe, China, Russia, Korea and Japan. Global instability is driving growth in defense budgets after years of stagnation.  Starting in 2017, global defense spending is rising.  Global expenditures were $1.682 trillion in 2017 and projected to grow to $2.023 trillion by 2022. Defense contractors must leverage new technologies to modernize national defense capabilities quickly to meet these new potential threats.

New approaches are needed to meet current demand and the growth potential in the commercial market. Passenger traffic expected to double over the next 20 years, coupled with a roughly 13,500 commercial aircraft backlog means commercial manufacturers know success lies in ramp-up production rates. The backlog has grown from just under 5 years in 2009 to just under 10 years in 2018. Operators can’t continue to wait a decade to support passenger demand.

Emerging players from Brazil, India, and China, as well as a resurgent Russia, see opportunity in the commercial and defense markets.  Previously, manufacturers in developing countries helped major aircraft OEMs like Boeing and Airbus cut costs and reduce time-to-market. These same companies now pose a threat by building their own programs to go after the surging demand and lengthening backorders by offering compelling cost advantages (roughly 20 to 25 percent lower).  These new OEMs will increase the competitive pressures on legacy OEMs as they seek to meet the demand in their local markets.

Once a costly and difficult business to penetrate, the space market has been turned on its head over the past 10 years with the emergence of start-ups like Blue Horizon, Space X and many others.  Start-ups have jump-started a new space race for human missions to Mars and commercial passenger trips to the Moon and likely more ambitious goals. New start-ups embrace enabling new technologies like 3D printing and engineer reusable rocketry will dramatically change all previous conventions. This threatens to overthrow traditional space companies if they don’t innovate and reinvent themselves.

With the rise of technological advancements in collaboration, engineering, and manufacturing the previous boundaries have shifted and made the unthinkable, possible.  Those rising to the top are the pioneering companies – traditional and start-up -- reinventing their vision, the way they work, and the services and products they deliver and make.

Industry veteran, Anthony Velocci, reveals a comprehensive view of the aerospace & defense industry. Read the whitepaper and get a snapshot of the industry from both a manufacturer and supplier perspective. Mr. Velocci addresses the following topics and more: 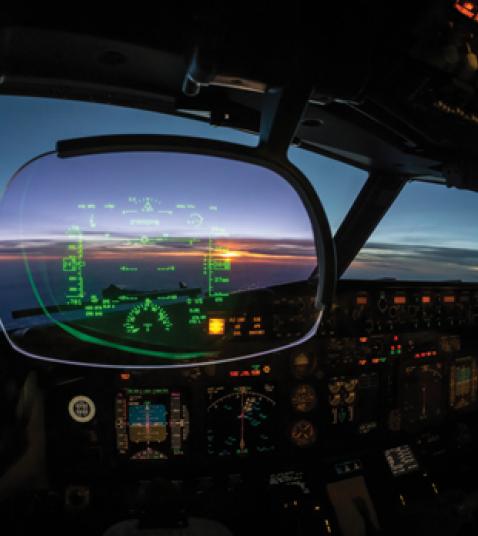 Many of today’s program management techniques and collaboration methods were invented in the 1950s and 1960s. That was the advent of the Critical Path Method (CPM) by DuPont, program evaluation and review technique (PERT) by Lockheed Martin and the Department of the Navy, and waterfall techniques perfected by NASA to help man get to the moon. The invention of the work breakdown structure revolutionized the organizational structure, tools and processes of the mid-20th century and it’s still predominately used today.

While these techniques were quite successful last century, they may be holding companies back today. Work processes and organizations structures still follow this very sequential process, resulting in multiple loops between the design office, the program office and of course, the manufacturing environment.

More than ever, companies must work more collaboratively across time zones, languages, and organizations to deliver new innovations to market. As companies evolve to work more collaboratively instead of operating in functional, organizational or geographic silos, an integrated platform is required to bring together an entire program - including program management, engineering, testing, manufacturing and operations. By moving beyond Product Data Management (PDM) or Product Lifecycle Management (PLM) systems --  to an enterprise-wide innovation platform --  all functions can collaborate in near real-time to build a program from concept to take-off.

Seamless digital collaboration extends to teams around the globe, from defining the initial program requirements, to developing the systems engineering architecture and system DMU, optimizing designs, designing the manufacturing process and using both virtual and physical testing to complete certification. Seamless digital collaboration on one platform enables rapid acceleration of new programs from concept to takeoff while significantly cutting development costs.

An Environment for Innovation in A&D

PLM with the 3DEXPERIENCE platform

While adopting a product lifecycle management (PLM) approach to manage product engineering processes is a necessary first step, by itself, it is no longer enough if you intend to optimize your product development and manufacturing processes and integrate your supply chain.

Learn how your company can better connect its entire product development ecosystem to accelerate innovation and achieve your business objectives. 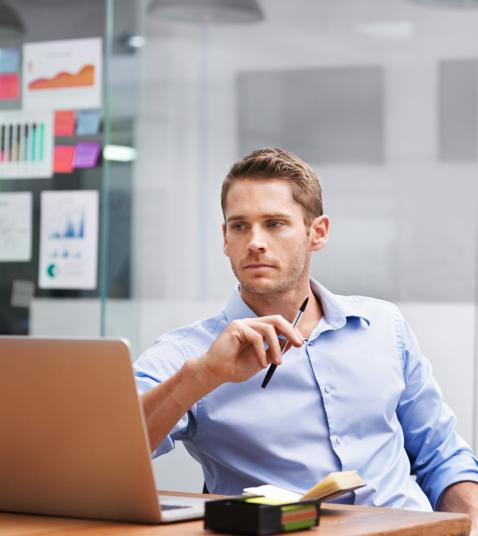 New technologies significantly lower the barriers to accelerating innovation. They also lowering the cost of capital needed to be a competitive player. Technologies like virtual reality, additive manufacturing, and robotics make it possible to design and prototype parts and subsystems much faster than ever before without the expense or delay physical tools require.

Having access to these new technologies allows companies like Joby Aviation and BRM Aerospace to enter and compete in the light aircraft and Electric Vertical Take-off and Landing (EVTOL) markets without massive capital investment. Emerging players like Sukhoi in Russia, Embraer in Brazil and COMAC in China can transform their development processes by leveraging new engineering capabilities to compete head-to-head with Boeing and Airbus in the upcoming years.

At the program level, a model based enterprise (MBE) approach including model base systems engineering creates the foundation for companies to explore the best configurations to meet customer requirements and deliver. An MBE unifies program processes, methods and data across departments and systems so program leaders can see and understand how decisions will impact business and customer requirements in near real-time.

Moving the enterprise business view to the engineering/systems view, a model-based system engineering (MBSE) leverages a functional system digital mock-up (S-DMU) to replicate the physical asset, processes and systems. This “digital thread” assembles all of the parts, sub-systems and system designs into a single virtual model.  Teams working across locations and in the case of suppliers different companies can collaborate to assess how well systems work together and model overall system performance.

In addition to MBE and MBSE, co-simulation can help optimize design choices through automated trade studies to find the best fit the overall requirements defined by the customer.  In the past, Aerospace companies would define two or three design approaches and then work for long periods to bring them to life. Now companies can leverage simulation to assess thousands of concepts and find the configurations that best meet the entire list of requirements in weeks vs. months while avoiding potential issues.

Having an integrated product innovation platform allows aerospace companies to virtually test and verify new programs as they are developed.  Testing represents 25 percent of a program's cost and time, yet almost a quarter of tests are unplanned. Virtual testing can replace much of the physical testing done today, cutting both cost and time to validate designs. Earlier and improved testing eliminates these unplanned costs and delays while identifying potential flaws or failures which could incur significant program delays, cost overruns and business impact. The 3DEXPERIENCE platform captures testing plans and results to provide through visibility and traceability throughout the development process. This helps provide insights to help drive costs out, improve quality and deliver the innovation airlines and contracting agencies demand.

Airbus wanted to reinvent its innovation process. To test this, they aimed to deliver half of a full scale Thrust Reverser Unit (TRU) in record time using the 3DEXPERIENCE Center and Platform at Wichita State University.

Learn how Airbus worked with the experts at the National Institute of Aviation Research and Dassault Systèmes go from concept to functioning prototype in only 84 days. 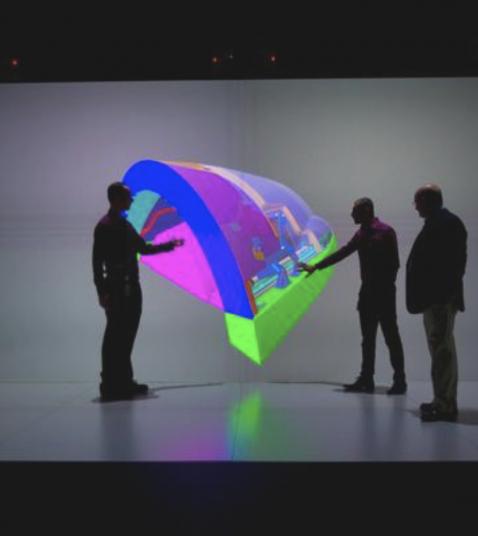 Manufacturing ramp-up presents a significant barrier to delivering new innovations to market profitably. How important is it for companies to understand the impact of design decisions on production?

Companies like  Latécoère  use the 3DEXPERIENCE platform to model their factory virtually to simulate how new innovations will be produced and foresee potential issues before they occur. This virtual model helps manufacturing teams determine how to best orchestrate and balance production flow before product starts.

From early concepts of Unmanned Aerial Systems to full aircraft programs, these pioneers leveraged the 3DEXPERIENCE platform to create new experiences for their customers. Learn how they broke the barriers to new innovations.

The Power of the 3DEXPERIENCE Platform

The 3DEXPERIENCE platform allows all functions in an aerospace & defense company to work together simultaneously on a single collaborative platform to bring innovations to life. This new system of work helps companies to:

With increased global pressures reshaping the structure of the Aerospace and Defense (A&D) industry, demand for new technology is creating a culture built on innovation.

Learn about the trends and challenges facing the aerospace industry and how key technologies enable companies to transform how they innovate.  Key customer stories are included in this comprehensive look in how the A&D industry is transforming itself for the 2nd century of flight.

Learn more about how our Industry Solution Experiences can help you accelerate your production ready innovation.

Accelerate concept to certification on the cloud

Test and certify on time while driving costs out

Stand-out from the competition with customized, cost-efficient and certified cabin experiences.